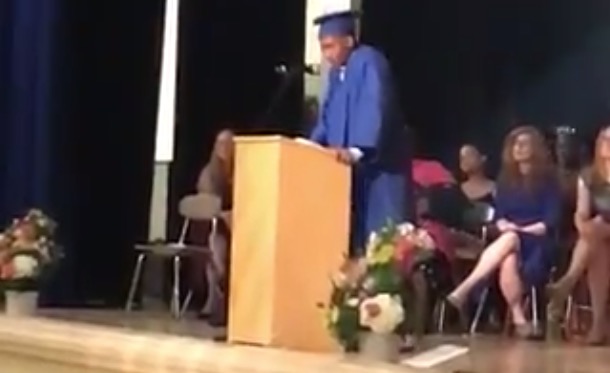 The video of Mason Bleu coming out as bisexual during his graduation speech went viral. (Mason Bleu/ Twitter)

A high school student received a standing ovation when he came out as bisexual while giving the valedictorian speech at his graduation ceremony in Saturday (June 29).

Mason Bleu, an aspiring actor, gave a speech to his graduating class on the theme of pride during Pride month.

He said: “Be proud of what you’ve accomplished, be proud of who you are, continue to seek knowledge and most importantly find ways educate yourself.

“I’ve struggled to be proud of something all my life. But since I’m preaching about being proud today, it’d be hypocritical of me to continue hiding.

“I’m not someone who likes getting emotional so saying this is extremely personal and hard.

“For a long time, I’ve struggled with my sexuality. I’ve dodged it and ignored it because I wasn’t proud of who I am.

“But today I’m changing that. I’m proud to be a bisexual man.”

The crowd can be seen cheering and giving a standing ovation in the video Bleu posted on Twitter, which has gone viral with almost a million views.

So I came out during my valedictorian speech. It was definitely the scariest thing I’ve ever done but the reaction was amazing. Thank you to everyone who supported me! #Pride2019 #LGBTQ pic.twitter.com/u8ih03NTJd

“I know what it feels like to be closeted… Trust me, you are not alone.”

He ended his speech by saying: “The important thing about being proud is that you should always be proud of yourself before you want anyone to be proud of you.

“I want to remind you that the one thing no one can take from you is in here [points to his head]. Your futures are all so bright.

“Thank you so much and happy Pride!”

Bleu later posted on Twitter that coming out in his speech was the scariest thing he’d ever done, but that he didn’t just do it for himself.

He wrote: “I did this not only for me but for anyone else who has struggled being closeted… I know what it feels like to be closeted and think that no one else is like you but, trust me, you’re not alone.”

Bleu appeared on CBS This Morning after the video went viral, and said that he didn’t know if he would go through with it even as he got up on stage, but he felt comfortable and “knew it was right.”

Happy Feet! 9 new pairs of shoes to see out summer