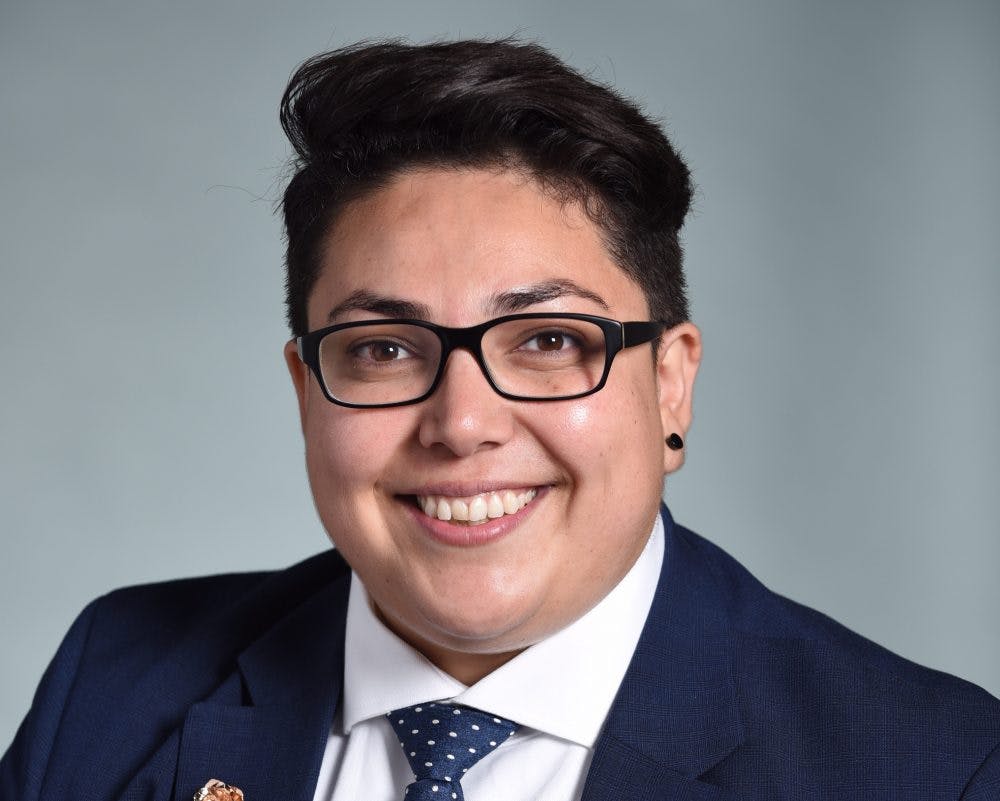 Coming from Southeast Los Angeles,and being a Latina lesbian, Cristela Solorio Ruiz understands the preconceived notions people have about her and where she comes from. She’s also a first generation American who easily distills the experience so many “first-gen” people have growing up in America today.

“A lot of first-gen kids take on this burden where they feel like they have to make their life a success because their parents struggled too damn much and worked too damn hard and came to this country looking for a better life,” said Cristela. “After realizing I no longer had basketball to lean into, if I didn’t do it for myself, at least I should attempt for a better future for my mother so her efforts weren’t in vain.”

Related: Monica Trasandes is on the front lines fighting back against LGBTQ invisibility

Basketball had been one of the constants in her life, but as a teenager she developed a unique type of cyst on her back that required a major surgery. Recovery meant that she wouldn’t be able to play any longer, and it also resulted in her falling behind. While Cristela played “catch-up” during her junior and senior years, confined to her house for much of those years, there were some adults, including those whose job was to help her succeed, who saw her efforts as futile.

“At one point a counselor asked my sister, who would pick up my schoolwork and bring it home to me, ‘Why do you even bother? Your sister isn’t college material,’” said Cristela.

Despite these detractors right in her own school, Cristela soldiered on and pursued a non-traditional path toward higher education by enrolling at Rio Hondo Community College. It was there where she says she had her “a-ha” moment.

She had discovered a passion and talent, for organizing folks. As a student, she pioneered a book rental program at Rio Hondo that alleviated the cost of attendance for the students, many of whom came from neighborhoods much like her own. Ultimately, Cristela was elected to serve as the president of the college’s student government organization.

Upon graduation, Cristela was sure that she wanted to continue helping people, especially her community, but it was also the height of the great recession and job opportunities were limited.  She decided to apply for an internship program with her local Congresswoman, Rep. Lucille Roybal-Allard, which opened her up to opportunities in Washington, DC.

In Washington, Cristela thrived. As Public Policy Fellow with the Congressional Hispanic Caucus Institute (CHCI), she had the opportunity to work for one of the country’s leading Latino civil rights groups, the National Council of La Raza (NCLR), now known as UnidosUS. There she developed her policy chops working on immigration policy.

It was her next step as an Obama administration political appointee in the Department of Agriculture that Cristela says really tested her mettle as a masculine-presenting woman.

As a “Confidential Assistant” at USDA, a political appointee position, she was part of the leadership of the department. Her role early on included receiving people who had appointments with her bosses at the department, and those interactions could sometimes prove to be awkward.

“Government itself is still very white, even when you remove the LGBTQ part of it. So walking into that space and presenting masculine, and wearing a suit, and having the short hair, especially at USDA which was old, and white, and rural, it kind of felt like every time I walked through a door I had to prepare myself for the stares,” said Cristela.

“Especially greeting folks from different parts of the country who weren’t used to seeing your presence. So it wasn’t like coming out every day, but it was that uncomfortableness of who am I going to surprise today.”

Thankfully, she says, she had bosses who were “110% supportive” and had her back. She was a diligent employee, who followed the rules and produced good work. Cristela may not have conformed to an interpretation of what following the dress code meant for some of her colleagues, but she was undeterred, her pursuit of advancing her community remained in focus.

“It really was about visibility,” she said.  “Every day, being visible in those halls or rooms was another day that people who were not comfortable being around me were going to get closer to being comfortable.”

Cristela also credits the support of other USDA staffers who she could talk to.

“It also helped that there were other masculine-presenting women in the Obama administration that I could lean in to and I could have conversations with and know that what I was feeling was real and not in my head,” said Cristela. “It was good to identify community because it was just so heteronormative.”

At the most basic level, what making a difference looks like for Cristela is working to elect pro-choice candidates to government. She does this as the Regional Campaign Manager, West for Planned Parenthood Federation of America, where she works to ensure access to health care for those with limited resources.

“In my case, I work to elect Democrats who are pro-choice. When it’s not an election year, we work to push federal and local level to advance reproductive rights, justice, and health. I work with affiliates on the ground, who are delivering services, primarily to black and LGBT people.”

After high school, Cristela says felt like she had been out to most folks, but within her own family, it was more of a “don’t ask, don’t tell situation” which meant that she hadn’t had an open conversation with her mother about it.

In 2015, on the day the Supreme Court handed down its marriage equality decision, Cristela was living in Washington and working for President Barack Obama. She received a call from her mom that day who started it by telling Cristela how momentous President Obama’s action on marriage was that day. It was obvious to Cristela at first the mistake her mom had made and she responded by first telling her that it was the Supreme Court that had made the news, not Obama. But then it occurred to her what her mother was attempting to do.

“As I’m trying to be a Democrat and explain things factually, I realize that she’s trying to have a conversation with me about me being gay without actually naming it.”

At this point, she paused in the conversation and said to her mom that she needed to apologize to her. Cristela stammered for the words to start the apology, but her mom stopped her, and said she didn’t have to say anything about anything, her mother just wanted to know that Cristela was “happy, healthy, and with someone that you love.”

“To me that was crazy because in her own weird communications way, she managed to not talk about me being gay, but also she accepted the fact that I was gay, and she was trying to have a moment with me through politics, which she knows I enjoy because of the work that I do,” said Cristela. “That was the day I realized she was the last person I needed to vocalize this to in order for me to feel like ‘cool.’ I always thought I had to choose between being a Latina daughter, or a queer person, because I couldn’t be both. It really aligned everything to where there were no secrets anymore.”

“I spent a lot of my youth hiding who I was. If you want to do something, attempt it, give it a shot, because then you’re not left with the ‘what if.’ Being comfortable in your own skin, makes making choices a lot easier because you know what’s in for you and what isn’t.”

ICE urged to release detainees at heightened risk for coronavirus

Jax Taylor defends homophobic comments by claiming “50% of my friends...

Find Your Inspiration: Queer music duo Nimmo on how escaping the...