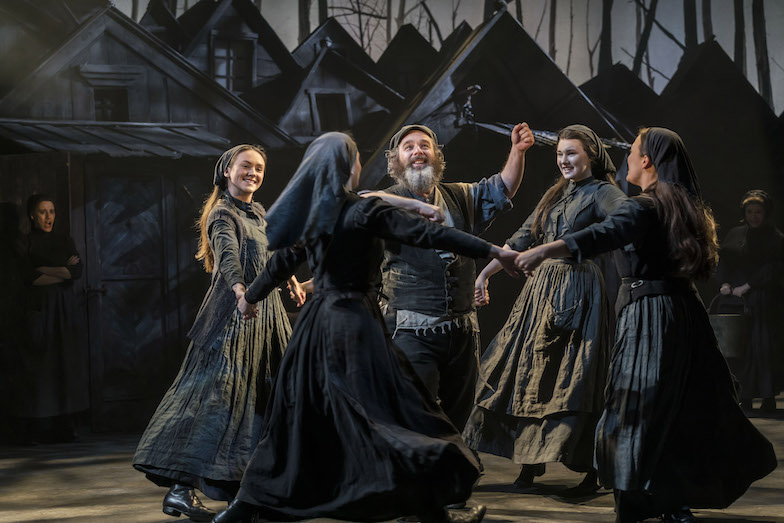 Trevor Nunn isn’t known for doing things by halves, and this rather spectacular and emotionally bruising production of the classic stage musical isn’t any different.

Brought together beautifully inside the Playhouse Theatre after transferring from its home at the sold-out Menier Chocolate Factory, it’s like stepping into a new world of pointed houses, continual rising smoke, and the faces of a small community bursting with tradition – and proudly so!

A muddy palette holds Andy Nyman (Tevye) as he battles with an expanding and ever-developing family, and the intrusion of unwanted external visitors that want to break up the traditions of this local Jewish community. Littered with gritty naturalism, this almost film-like piece of work transforms not only visually with its static set, but also with its actors. There’s a path that winds it way from an extended stage all the way through the audience before existing. Also extending out to surround the dress circle, this version of Anatevka is a 360 experience personified – even if the seating space is a little cramp for those of us above six-foot!

But this production isn’t all face and no substance, it serves up a wealth of greatness. And none greater than the previously mentioned Andy Nyman as Tevye. Charming in voice as he is in character, there’s an ever-growing resistance to the many changes happening in his life that causes you to care unconditionally for him and his wife Golde, played by the stern Judy Kuhn.

While their daughters plan their life beyond the arms of their parents, it presents pockets of discussion and song between our leading man and the audience – and Andy is more than up for the challenge. His performance of If I Were A Rich Man easily the clear standout of the night. And of course a welcomed (but unofficial) sing-a-long for the audience.

Alongside a vast ensemble that’s fill this world perfectly throughout, this production of Fiddle on the Roof is sure to leave audiences feels as moved as they are thrilled. Easily one of the best pieces of theatre playing in the West End currently, you’d a total fool to miss out on a trip to Anatevka and this mesmerising production.

More information can be found here.