If Trump does get impeached, here’s a reminder of why we should be very afraid of Mike Pence

As Donald Trump faces the prospect of impeachment, Mike Pence is closer than ever to the Presidency – and that is probably not a good thing for LGBT+ people.

Although  the White House has sought to downplay his record, if elected Pence would be the most anti-LGBT President in recent memory.

Pence’s anti-LGBT beliefs have persisted throughout his career, at the core of his ideology and politics.

As the head of the right-wing Indiana Policy Review Foundation think tank during the 1990s, Pence opposed efforts to outlaw discrimination based on sexual orientation.

Clippings unearthed by CNN’s KFile revealed that Pence claimed that homosexuality was “a choice” in the 1990s, as he fought against efforts to protect gay people from discrimination.

He explained: “The great vast majority of the psychological community says homosexuality at a very minimum is a choice by the individual, and at the maximum, is a learned behaviour.”

While Pence was in charge of the Indiana Policy Review, the group attacked a job fair for gay journalists, claiming that they cannot be trusted because “gaydom” is a “pathological condition.”

The group also hit out at gay people serving in the army, claiming: “They are known to carry extremely high rates of disease brought on because of the nature of their sexual practices and the promiscuity which is a hallmark of their lifestyle.”

Pence also served on the board of the Indiana Family Institute, an anti-LGBT lobbying group.

His first bid for office featured a gay ‘cure’ pledge

In 2000, Pence published an election manifesto calling for HIV/AIDS prevention funding to be drained from “organisations that celebrate and encourage the types of behaviours that facilitate the spreading of the HIV virus,” an apparent reference to LGBT+ inclusive groups.

Pence instead called for funding for “institutions which provide assistance to those seeking to change their sexual behaviour,” which was long interpreted as an endorsement of the practice of gay ‘cure’ therapy.

Pence now denies he advocated conversion therapy, with spokespeople describing the suggestion as “patently false” and claiming he was simply interested in promoting safe sex.

However, he did little to correct the public interpretation of his words until he became Vice President.

In Congress he led attacks on LGBT+ equality

Serving in the House of Representatives from 2001 to 2013, Pence repeatedly voted to reject hate crime laws and discrimination protections for LGBT+ people, and co-authored a bill attempting to amend the US Constitution to outlaw same-sex marriage.

Explaining why he opposed discrimination protections, Pence told Congress: “If an employee keeps a Bible in his or her cubicle, if an employee displays a Bible verse on their desk, that employee could be claimed by a homosexual colleague to be creating a hostile work environment.”

He also strongly opposed the repeal of Don’t Ask Don’t Tell, which banned gay people from openly serving in the armed forces.

Speaking in 2010, he said: “I believe the American people don’t want to see the American military used to advance a liberal political agenda, especially when the men and women who serve in our military haven’t had a say in the matter.

“There is no question that to mainstream homosexuality within the active duty military would have an impact on unit cohesion, an impact on readiness.

As Governor of Indiana he pushed an anti-LGBT law

Pence’s term as Governor of Indiana, from 2013 to 2017, was dominated by controversy over his ‘Religious Freedom Restoration Act’, which allowed religious people and businesses to cite their conscience as a defence in legal disputes.

The passage of the law, which went far beyond legal protections in other states, led to a nationwide boycott of Indiana and a spate of lawsuits from LGBT+ groups.

Pence appeared unable to answer when asked whether it should be legal to fire people because of their sexuality.

In a 2016 interview, Pence was asked: “Yes or no: do you believe gay and transgender people should be able to be fired from their jobs just for that reason only?”

After an awkward ten-second silence, Pence responded: “It’s a great privilege to be your Governor.”

As Governor, Pence also attempted to reinforce the state’s ban on same-sex marriage with a 2013 law that made it a felony to “knowingly solemnise a marriage of individuals who are prohibited from marrying.”

He also imposed cuts to HIV testing and a ban on needle exchanges, leading to the worst outbreak of HIV/AIDS in Indiana’s history, sparking an intervention from the Centers for Disease Control and Prevention.

In the White House, he has quietly spearheaded efforts to roll back LGBT rights protections

A 2018 report revealed that Pence has played a pivotal role in actions taken by the Trump administration to dismantle civil rights protections for LGBT+ people.

The report alleged that Pence was behind a divisive executive order that aimed to legalise forms of religious discrimination against LGBT people.

Meanwhile, Pence has openly voiced support for the Trump administration’s decision to bar US embassies flying from rainbow flags, making clear: “It’s the right decision. I support that.”

The Vice President maintains close ties to anti-LGBT hate groups, and has hit back at “attacks” on his wife, Karen Pence, for teaching at a school that discriminates against gay children. 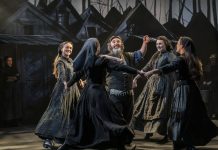 Fiddler on the Roof a thrilling emotive ride you must go...