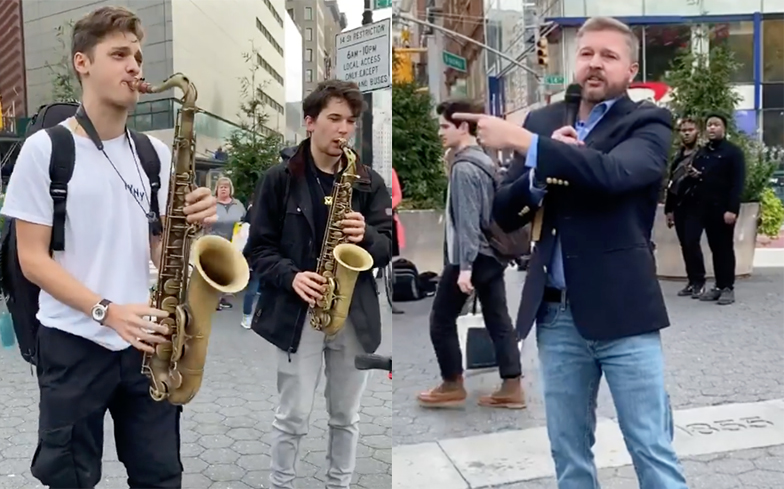 Sometimes the best way to deal with bigots is to drown out their hate.

And that’s exactly what street musicians Augie Bello and Julian Roel did when they encountered a homophobic preacher in New York City’s Union Square Park, using their saxophones to cover up his hateful speech.

“The homosexual community has the highest suicide rate of any group,” the man can be heard saying before asking a gay man if he wants to be “saved”. According to Queerty, he also said that “all gays will burn in hell”.

Fortunately, the two musicians were nearby to drown out the noise, with one of them even riding a SwagCycle for maximum impact.

The moment was caught on camera by filmmaker Nicolas Heller, who said: “This strapping young gent (who clearly gets laid regularly) is preaching that the LGBTQ community is going to burn in hell, so [Augie] and [Julian] offer some foreground instrumentals.”

Speaking to Queerty, Augie said: “Me and my friend Julian had just had lunch and were heading back to school (The New School For Jazz) when we heard this guy saying some really hateful homophobic things.

“What the video doesn’t show is what he said before we took out our saxophones. He was saying all gays will burn in hell and that they will be in a ring of fire. So I looked at Julian and he looked at me and we instantly had the exact same thought, to drown out the hate with our saxophones.

“Julian and I were shocked that the video went viral, but it also makes us extremely happy to see how much support there is for the LGBTQ+ community.”

More of this, please!

Staying sober during the holidays

Why did so many queer voters back Trump?

Gay Day at the Zoo is May 5

Trump executive order to suspend US immigration for 60 days