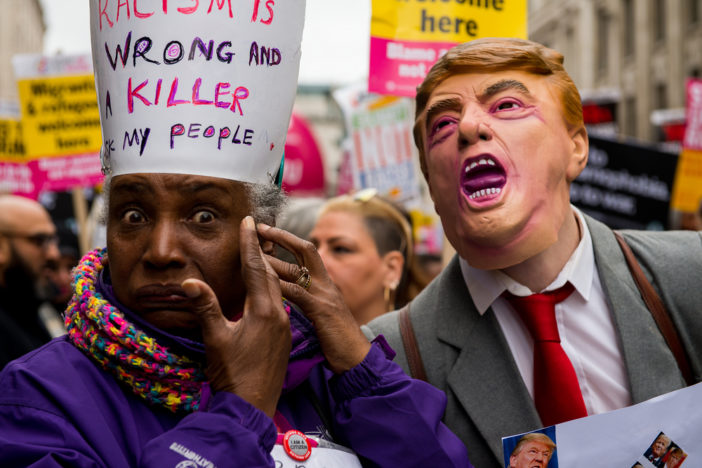 In the wake of President Trump’s State of the Union on February 5, a four-year-old Twitter account sprung to life. It supposedly belonged to someone named “Misha” claiming to be from Inglewood, California. The account, @BlackTransQween, came out strongly in support of the President.

“I am a black trans woman and after this amazing speech tonight I proudly say I support Donald Trump my President. We need to get behind this man. #STOU” was the first of many posts to the account. Her tweets quickly gained prominence due to the seeming incongruence of a black, transgender Trump supporter.

Many of Trump’s policies have been particularly hostile towards transgender people, including the administration’s attempt to bar trans people form the military.

“ima go sign up and vote for the 2020 contsst. im tired of hearing this bull shit from my friends I am their opressor. It’s a free country bitch. Only thing opressin is when they be makin government be in everything. Trump sit back and let stuff grow he ain’t all up in our biz,” said another posts from the account, in an odd, grammatically incorrect show of support for the President.

Comedian and writer Gabe Gonzalez, aka @gaybonez, was suspicious of the account and its choice of language, and began to investigate.

He took “Misha’s” photo and did a reverse image search via Google. In doing so, he revealed that the photo being used on @BlackTransQween’s account was of trans health activist Charlene Jacqueline Arcila. The account’s user had added bright red lipstick and eye makeup to her photo

Arcila was the founder of the Mazzoni Trans-Health conference—she passed away in 2015. It’s likely that whoever set up the @BlackTransQween account had simply found a photo of a black trans woman online without considering that the photo might have been of a person of some prominence.

After the ruse was revealed, the account was locked and later suspended by Twitter, only to come back as @TransQweenMisha, which was also quickly suspended.

The latter also received a new profile photo, but that one was even more obvious: It was a drawing of LGBTQ rights icon Marsha P. Johnson, drawn by Micah Bazant.

No additional accounts have been located.

This hotel is taking over our Instagram feeds in the best...

Here are the 5 steps gay men should follow if they’re...

Turkey in a bottle and other D.C. novel Thanksgiving spins 2019

Vigil against anti-LGBT violence draws over 300 to Dupont Circle

A different summer at Delaware’s beaches

ABOUT US
Wirld is your LGBT news, politics, entertainment, music and fashion website. We provide you with the latest breaking news, issues and content for the LGBT community.
Contact us: webmaster@wirld.com
FOLLOW US
© © - 2023 https://wirld.com/privacy
MORE STORIES

Tips For Coming Out As Gay