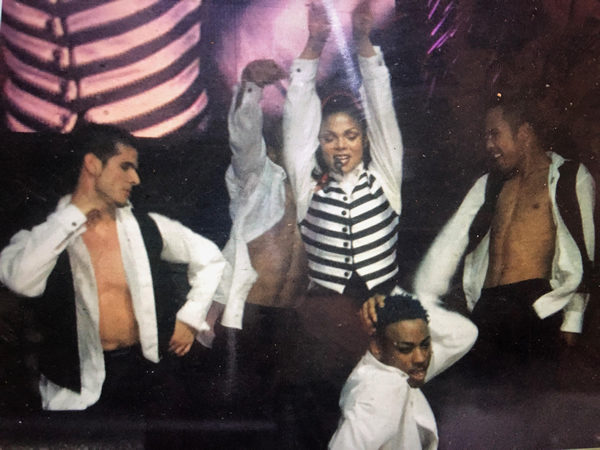 Janet Jackson has made innumerable contributions to popular culture, from chart-topping music to pioneering videos to memorable film roles. She’s a bestselling author, a philanthropist and outspoken advocate for racial, gender and LGBTQ equality. She’s a fashion icon, a sitcom star and award-winning writer.

But perhaps the work for which she will be best remembered is as a dancer.

From strutting alongside Paula Abdul in 1986’s breakthrough “Nasty” to her oft-imitated solo performance in “Pleasure Principal” to the militaristic “Rhythm Nation” to the mid-tempo grooves with Jennifer Lopez in “That’s the Way Love Goes” and beyond, Jackson has created some of the most iconic dance moves in modern music.

And so, as the Rock and Roll Hall of Fame belatedly prepares to induct Jackson on March 29, it seems fitting to talk to one of her best-known dancers, Tyce Diorio, about her legacy and her importance to the dance world.

Diorio first came to Jackson’s attention after he auditioned and was booked for her “If” video, the second singlefrom 1993’s “janet.” album. He said mastering Jackson’s intricate choreography can be like solving a math problem.

“Every part of the choreography of ‘If’ is a masterpiece,” Diorio said in an interview with the Blade. “[Choreographer] Tina Landon is such an expert at building a piece of work around an artist, she did it so well. You know good choreography when it’s still being done 25 years later. It feels so good to do even still today, it’s still relevant.”

After the “janet.” album, Diorio auditioned and was hired for the follow-up project, “The Velvet Rope,” accompanying Jackson on a hit world tour and appearing in more videos, including the No. 1 smash single “Together Again.” He describes that period of his career as life changing, performing all over the world and on major award shows.

“‘Velvet Rope’ was a masterpiece album,” Diorio said. “The tone and message were so brave and so individualized and personal but also resonated with us on the tour. And she really pushed the envelope creatively as artists should do.”

He described the tight bond that developed among the dancers and the close involvement Jackson had in all areas of production, from the dancers’ hairstyles to their moves.

“We had tattoos, piercings, different colored hair, no one was doing all that on the music scene. Janet has always been one of those artists that was groundbreaking,” he said. “It’s so rare that an artist is so involved in a project from the makeup and hair to the choreography, she was involved in every portion of it.”

Also on “The Velvet Rope” tour was the upstart group NSYNC, which Jackson featured as her opening act for part of the tour. So Diorio knew the group’s lead singer, Justin Timberlake, who would later share the stage with Jackson during her infamous Super Bowl performance.

“When NSYNC started as opening act they were very friendly and fun,” Diorio said. “We all had a nice rapport.”

“I thought the Super Bowl performance was fantastic and so well designed in terms of the set and choreography and the way Janet performed with the dancers,” he said. “So for me in terms of the controversy I don’t have any thoughts on that. What happened was an unfortunate situation that just happened and we all move on from it.” Agreed.

Jackson is known for letting her dancers share the spotlight and many have gone on to tremendous success on their own, from Abdul and Lopez to Jenna Dewan and Diorio, who won an Emmy Award for his work on “So You Think You Can Dance.” Diorio is in production on his 16th season as a judge on the hit show now, which will air this summer on Fox. The LA-based dancer/choreographer, who’s gay, also recently finished shooting a film in Europe called “High Strung.”

Diorio has danced and choreographed for a number of major pop stars, going on tour with Paula Abdul when he was just 19. Later, he appeared in Ricky Martin’s video for hit song “Livin’ La Vida Loca” and danced in Jennifer Lopez’s debut tour.

But it’s his work with Jackson that remains “transcendent.”

“When I took the stage with her it was an otherworldly experience. You can’t explain it fully. There are no words. It’s transcendent. You feel like you’re in another space and time, it’s such a journey.”

It’s difficult to put into words the experience of performing on stage in front of 20,000 screaming fans — the adrenalin rush and the stamina required to pull it off night after night — and the feeling when the tour ends.

“When the tours were over it was bittersweet but I go back to my life and that’s magical too,” Diorio says. “I feel lucky in my life whether I’m in front of millions of people or not. That’s the challenge in our business, separating those moments from the rest. It’s like a chapter in one’s life. All good things come to an end.”

Last year, Diorio received an unexpected call from Jackson’s team, inviting him along with many of her previous tour dancers to a reunion in L.A. and a blockbuster performance of “Rhythm Nation” at the Hollywood Bowl. The performance — part of her “State of the World Tour” — can be found on YouTube. In it, dancers from all of her previous tours take the stage to recreate those iconic moves. Then Jackson took time to introduce each dancer to the audience.

“Which artist would do something like this? There’s no one else who could pull this off,” Diorio recalls. “It was magical, we were all blown away. Being on the stage, we came together so seamlessly. We all knew each other, we were so inspired and motivated, an awe-inspiring moment. It only happens once. One for the books.”

Asked to name one Jackson song he’d like to choreograph, he said “Runaway.” His favorite choreography to perform? “Throb.” The hardest to perform? “Rhythm Nation.” What’s more stressful — performing on the “Oprah Winfrey Show” or “Saturday Night Live?” Oprah. “Because it’s Oprah!”

Diorio says it was an honor to dance for Jackson because she chooses all of her own dancers personally.

“Working with Janet and her being who she is, it’s something special … so you feel so special if she chooses you,” he said. “To the dance community she’s such an icon and such a queen. It was my absolute dream to dance for her.”

To say that Jackson’s career is in resurgence mode would be an understatement. In 2015, she released “Unbreakable,” her seventh No. 1 album, making her only the fourth act in music history to chart No. 1 albums in four consecutive decades (along with Barbra Streisand, Bruce Springsteen and U2). She followed that with the “Unbreakable” tour, took a break to have her son, Eissa, then launched her massively successful “State of the World Tour,” which played 76 dates across North America and two recent shows in Japan. She was last year’s Billboard Icon Award recipient, then picked up several more awards in 2018, including the Icon Award at the BMI R&B/Hip-Hop Awards; the Inspiration Award at the MNET Asian Music Awards; the MTV Europe Global Icon Award and the Impact Award from Radio Disney, to name a few.

In August, she debuted a new single, “Made for Now” with Daddy Yankee, her 20th No. 1 Billboard Dance single; a Spanish version spent a month atop the Mexican charts. In December, the Rock and Roll Hall of Fame announced she would — finally! — be inducted on March 29. And earlier this month, Jackson announced a 15-date Las Vegas residency called “Metamorphosis” beginning in May and will co-headline the U.K.’s Glastonbury Festival in June.

Given all her success, fans and critics have wondered why it took the Rock Hall so long to induct her. Jackson was first eligible in 2007.

“The important part is that she is being inducted now,” Diorio says. “It doesn’t always make sense, you have to keep doing what you do. In terms of Janet, it’s so great that she’s being honored in this way. Everything has its right time.”

Indeed, but others have speculated that a combination of the Super Bowl scandal and other less apparent factors led to the delayed induction. Perhaps Jackson’s most prominent cheerleader for Rock Hall induction is Mike Litherland, who has worked since 2012 to get Jackson into the Hall. He started a Facebook page that year titled, “Induct Janet Jackson into the Rock & Roll Hall of Fame,” which has more than 120,000 followers. Why does he think it took so long for the Hall to induct her?

“I blame the nomination committee from years and years ago,” Litherland said. “It still had that ‘boys club’ mentality. Thankfully, the R&R Hall of Fame Foundation completely overhauled their nomination committee in 2015 and brought in fresh, smart, music industry experts. They eliminated some of the dead weight and injected that new blood into the mix. They added several key women as well — previously there were only a handful of women. I think that had an incredibly positive impact.”

Litherland was in his car when he heard the news about Jackson’s induction.

“As soon as I heard Janet’s name, I leaned back a little in the car seat and just beamed from ear to ear,” he said. “And I have to admit that I got a little teary-eyed. It feels good to finally have Janet’s induction come full circle. I’m beyond thrilled for her because she’s so deserving of this honor.”

He’s attending the induction ceremony and hosting a pre-party, as well as an after-party featuring DJ Aktive, Jackson’s touring DJ. For information and tickets, visit the #InductJanet Facebook page.

Fans of other artists yet to be inducted have reached out for advice thanks to the success of Litherland’s social media campaign for Jackson. He’s heard from fans of Duran Duran, Whitney Houston, Carly Simon, George Michael and others hoping to emulate his success. So what’s next for Litherland’s campaign?

“I took a bit of a break from the #InductJanet social media pages after the induction announcement,” he said. “I just needed to take a breather. It’s tons of work and I’ve committed a lot of time, energy and money to the movement along the way. Ultimately, I think I’ll continue and just run it as a general Janet fan page since the Rock Hall focus is now officially behind us.”

Jackson will be inducted by Janelle Monae at the ceremony held at the Barclays Center in Brooklyn. The other six 2019 inductees are: The Cure, Def Leppard, Stevie Nicks, Radiohead, Roxy Music and The Zombies.

Trans provisions in Obamacare under attack