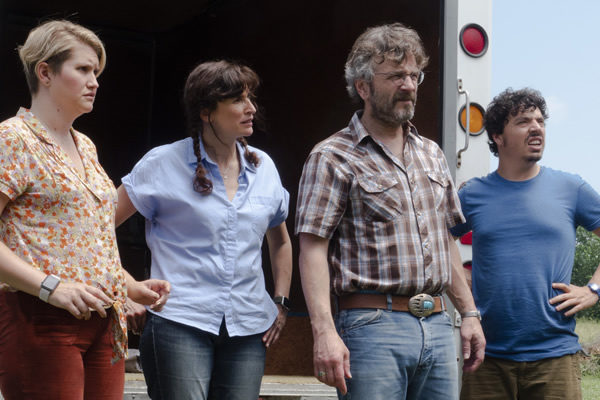 Now playing in an exclusive engagement at the Landmark E Street Cinema, “Sword of Trust” is a low-key finely observed hardscrabble comedy about dreams and schemes and conspiracy theories.

As the movie opens, Cynthia (Jillian Bell) has traveled to Birmingham, Ala., to claim her inheritance from her grandfather. She and her wife Mary (Michaela Watkins) are expecting a house, but they learn that the property has been reverse-mortgaged and now belongs to the bank.

Instead, Cynthia inherits a prized family heirloom—a Civil War-era sword that her grandfather brandished at birthdays, holidays and other special occasions. It comes with a questionable certificate of authenticity and a long rambling letter from her grandfather that says the sword proves that the South really won the Civil War.

Cynthia and Mary head to a pawn shop to sell the sword, but the pawnshop owner Mel (Marc Maron) is skeptical. Things change when his Internet-obsessed assistant Nathaniel (Jon Bass) discovers that there is a lively market for the sword among die-hard conspiracy theorists who are searching for relics that prove that the Confederacy really won the “War of Northern Aggression.”

The unlikely quartet decide to sell the sword and enter into the high-stakes (and high-comedy) world of Civil War mythology.

A member of the “mumblecore” movement, Shelton uses her usual techniques to draw fascinating performances from her handpicked cast, most of whom she has worked with before. She lets the actors improvise, which in her capable hands gives the dialogue a natural feel and lets the comedy rise from the quirky characters and the outlandish situations they wander into. The pacing sometimes lags, but Shelton quickly gets the action back on track.

The central cast is strong and creates dynamic and believable relationships. Maron’s outstanding performance is the solid anchor of the movie. Well known for his landmark podcast “WTF with Marc Maron” (which averages more than six million downloads per month) as well his popular comedy specials and his leading role on the Netflix series GLOW, Maron brings a wry sensibility to the well-worn pawnshop owner. A reluctant transplant to the Deep South, Mel has been kicked around by life, but he’s trying hard to maintain his sense of decency and optimism. Maron’s performance is assured, with a superb sense of timing and a knack for straddling the line between comedy and drama.

Bell (“Rough Night”) and Watkins (“Transparent” and Hulu’s “Casual”) have a delightful and believable chemistry as a long-term lesbian couple. Both are gifted physical comedians. Both create interesting and well-rounded characters with lots of quirks and surprises. Let’s hope Shelton is already thinking about a follow-up movie about what will happen when Cynthia and Mary become mothers.

Bass (“Loving” and Comedy Central’s “Big Time in Hollywood, FL”), the fourth member of the central quartet, turns in a finely tuned performance as Nathaniel, the clueless and credulous pawnshop assistant. Although he misses a lot of social cues, he displays a deep sense of compassion and gives the movie heart. Nathaniel doesn’t talk a lot, but Bass maintains a lively screen presence with a wide array of unintentionally goofy expressions, and when he does talk, he’s hilarious. He may even convince you the Earth is flat.

The supporting cast is also excellent. Shelton makes a cameo appearance as Deirdre, Mel’s ex-girlfriend who has fallen on hard times. Her fine performance keeps the movie grounded in economic and emotional realities. Al Elliott and Elise Mayfield have fun as Jimmy the snack shop owner and Phyliss the Realtor; Daniel Bakkedahl, Toby Huss, Tim Paul and Whitmer Thomas also have great fun as a variety of Civil War conspiracy theorists.

The multi-talented Maron also provides the movie with a haunting bluesy score. Director of Photography Jason Oldak nicely captures the dusty despair and stubborn resilience of people living on the wrong side of the tracks.

Filled with outrageous humor and a genuine warmth, “Sword of Trust” is a great way to spend a summer afternoon or evening at the movies. 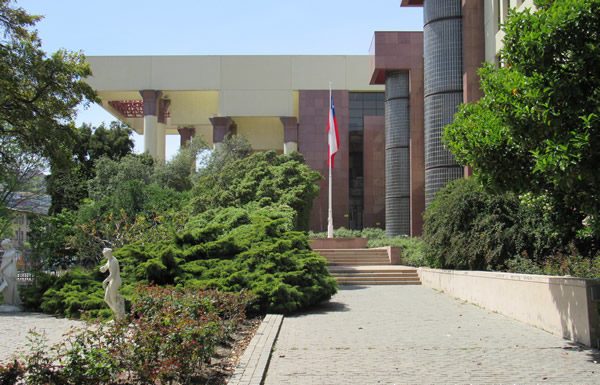