The Committee on Foreign Investment in the United States has designated Grindr a national security risk, according to an exclusive report from Reuters published on March 27.

Reuters could not obtain CFIUS’s specific
concerns about Grindr for its report, but the designation has prompted
Chinese tech company Beijing Kunlun Tech Co. to put the world’s largest LGBT
dating app with more than 3 million daily users up for sale.

Kunlun, which paid $93 million for a majority
stake in Grindr in 2016 and purchased the rest of the company two years later,
will sell the dating app through an auction. Grindr has hired American
investment bank Cowen Inc. to orchestrate this sale. The Reuters report claims
executives at the dating app are hoping to attract interest from U.S.
investment firms as well as competing apps.

The news of Grindr’s national security risk
designation comes at the same time that the U.S. government has been attempting
to increase the safety of personal data of U.S. military members and
intelligence personnel.

Grindr declined to comment for the story when the
Washington Blade reached out to its press division through email on March 30.

The gay dating app has come under fire previously for security issues, most notably last year when it shared some of its users’ HIV statuses with companies Apptimize and Localytics. The tech analytics firms were hired to test the performance of the app and given users’ HIV statuses and most recent test dates in the process.

Grindr President Scott Chen sparked controversy last November when he said in a Facebook post that “marriage is a holy matrimony between a man and a woman.”

The Blade spoke to several Grindr users through
the dating app about their positions on the CFIUS’s designation and Grindr’s
forthcoming sale. Many users who were willing to
talk for the story and provide their names were not surprised by the security
risk label.

“I can see the argument for Grindr being a
potential threat, particularly because — if I’m not mistaken — a Chinese
company has bought this app. Their data privacy laws are a little different
than in the U.S.,” CJ Clark, a Grindr user, said.

Daniel Klein, a 22-year-old university student, said that while
his knowledge of U.S. cybersecurity systems is limited, “Grindr is relatively
easy to grab information off of.” He cited the release of individuals’ HIV
statuses by the company as an example.

But he said security issues on the gay dating app go further than
these leaks. Profiles do not require a public photo, name, age, bio, or any
information a user does not want to include.

“There is generally no security on Grindr itself,” Klein said.
“Anyone can pretend to be anyone. It’s very open to catfishing.”

Despite the potential problems with the privacy Grindr permits its
users to have, Klein doubts that the app presents significant national security
risks.

“Most government personnel have government phones and personal
phones,” Klein said. He speculated that it’s “unlikely they keep Grindr on
their government phone.” Therefore, the app “presents as much of a risk as any
other app that requires an email and password but has limited security.”

Some users went further, calling the CFIUS’s decision to force
Beijing Kunlun Tech to sell Grindr “a double standard” on the part of the U.S.
government.

“Bloomberg has reported multiple examples of U.S. companies,
specifically DNA/genealogy companies such as FamilyTreeDNA, as having shared
user data with 3rd parties such as the FBI and life insurance companies,”
Matthew Paloscio, a Grindr user, said. “In the future, life insurance companies
could decline or selectively rate applications for life insurance, based upon
genetic data even if the applicant is currently in perfect health. Companies
voluntarily handing over user data to government agencies in the US has
happened and will continue to happen.”

Others view the sale of Grindr as positive, regardless of the
reasoning behind it.

Cole Guye, another Grindr user with whom the Blade spoke, said
he’s hoping the sale, if to a competitor, brings changes to the popular dating
app.

“Honestly, this app is so toxic and tries to gouge people for a
cost more than Netflix and I shouldn’t be scared to have a face picture,” he
said. “People I’m not interested in who are scary close have sent me threats
and making new accounts is too easy for creeps that get banned.”

Some researchers share Guye’s concerns and worry that Grindr and
similar apps may have a negative effect on gay men’s health.

A study from Time Well Spent in early 2018 found
that 77 percent of Grindr users regretted opening the app after they
closed it. It also concluded that Grindr left men feeling more “unhappy” than
any other app.

Other Grindr users to whom the Blade spoke didn’t have strong
opinions on the designation or the effects of the app itself within the gay
community. They simply wished the government would release information on the
problems it sees with the app.

“I feel that if there’s a legitimate counterintelligence reason to
deem the app a security risk, then the administration should be more
forthcoming to the public on the details of the risk,” Zach Banks said.

“If American citizens are at risk of having their private
information stolen and distributed, they have a right to know about that,” he
added. 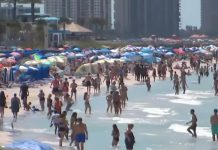