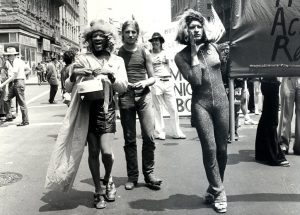 Recent history has brought incredible progress for the LGBTQ community in the form of this map “…Total victory for the advocates of same sex marriage..” But lesser known is this map over here – where things get tricky. “So does becoming a business owner mean you have to check your convictions at the door?” “Right now the state of Michigan does not include sexual orientation and gender identity in its law” “I’m just really nervous” “I actually have something important to talk to you about today.” The fact is, in most states, it’s still currently legal to fire LGBTQ people, kick them out of a store or business that serves the public, or evict them from housing because of their sexual orientation or gender identity.

“The ayes are 49, the nos are 50, the bill is not agreed to.” Often it’s as subtle as a boss picking another job application. Or a landlord denying rent, without explanation. These are the rights protected by the civil rights act of 1964. “My fellow Americans… those who founded our country knew that freedom would be secure only if each generation fought to renew and enlarge its meaning.” Following the passage of the Civil Rights Act, federal and state laws prohibit this type of discrimination on the basis of race, color, religion, sex and national origin. This is called Enumeration. If you list the characteristics that are most often the subject of discrimination it removes any doubt that those people are protected.

“Since these early days, I have seen and I have experienced many other types of discrimination, and all of them were rooted in the fear of people that were different from the majority.” But sexual orientation and gender identity are not enumerated in most states and a report by the Human Rights Campaign found that lawmakers in 29 states have actually proposed bills that would actively discriminate against LGBTQ people. “We have what’s called a patchwork of civil rights protections on this issue in this country.” Sam Brownback, the governor of Kansas, went so far as to write an executive order to reverse a measure that barred employment discrimination against LGBTQ people. On top of all of this, there’s systematic discrimination in many schools throughout the country. “Ellen Degeneres has been speaking out, voicing her outrage about the cruelty that spiraled out of control in our schools and beyond.” “Today is October 20th, 2013. Hopefully today will be a big day of my life.

In a positive way.” The states in red here have “no promo homo” laws that forbid teachers in public schools from even mentioning homosexuality at all. “If you are reading this, it means that I have committed suicide. Those words written on a warren country teenager’s tumblr page, and now sparking an outcry from the LGBTcommunity tonight.” That’s where coming out videos on YouTube like Drew’s and Adam’s are so helpful. “So I have something serious I want to talk to you about.” “Yeah, I like guys.” “I have to tell you that I’m gay. Always have been, always will be.” “And do you know how I drew that in 7th grade, and how in 7th grade I wanted to kill myself? It’s been something that I’ve not liked for a while. Especially when people call me fag a lot.” “There are too many kids out there suffering from bullying, rejection, or simply being mistreated because of who they are.” And there’s proof that enumeration works. GLSEN, an organization that advocates for LGBTQ students, says students who go to school with enumerated LGBTQ policies experience significantly lower levels of bullying.

“Federal investigators are looking into accusations that Minnesota’s largest school district discriminates against gay students following 7 student suicides in fewer than 2 years.” These are laws that save lives. 2012 was the first year in US History where more people supported same-sex marriage than people who didn’t. “I know I’m kind of destroying every hope and dream you ever had for me…” “No! Not at all.” 2015 will be remembered for marriage equality. Public figures have been more open discussing their own sexuality. And popular TV shows have begun to incorporate more LGBTQ characters, and the stories they tell. But if you look at these two maps, side by side, it’s clear the LGBTQ civil rights battles are far from over..

Organ Donation in the Time of COVID-19

Mastercard will allow trans people to use chosen names on cards

ABOUT US
Wirld is your LGBT news, politics, entertainment, music and fashion website. We provide you with the latest breaking news, issues and content for the LGBT community.
Contact us: webmaster@wirld.com
FOLLOW US
© © - 2022 https://wirld.com/privacy
MORE STORIES