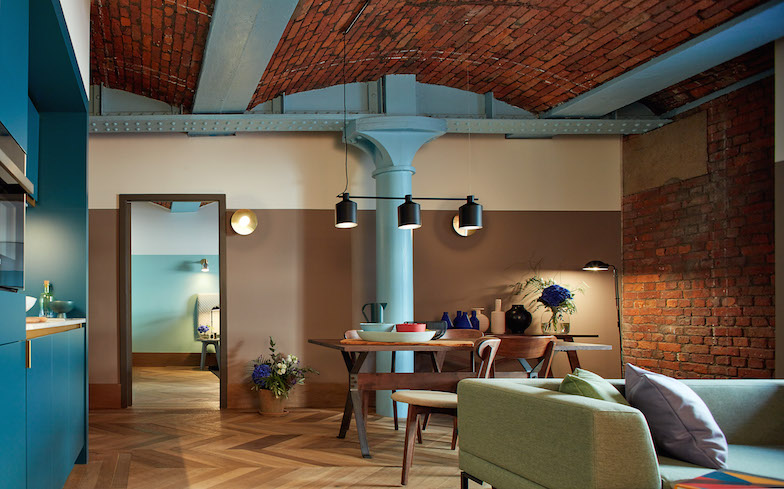 Manchester has never had it so good. Especially when it comes to places to stay.

Back in the day, you could stay at somewhere off-puttingly grand like The Midland, somewhere grimly business-person-oriented like The Britannia or maybe a gay hotel like The Rembrandt where there was one bathroom in the whole hotel.

Now it is a city reborn. With the biggest building boom since anyone can remember, hotels are popping up like pop-ups… only they’re here to stay. There was always The Lowry in Salford, which was modern and big and where everyone had to stay because of the lack of anywhere else but now there’s the gorgeous Gotham in an historic Lutyens building in town; the Malmaison, which is handy for Piccadilly Station and glamorous, albeit in a bit of a 90s way; on Newton Street in the Northern Quarter there’s Cow Hollow doing quirky-cool boutique like no other and, for the last couple of weeks, Native, which takes Manchester well into the 21st century.

Walking into the huge Victorian warehouse less than two minutes from Piccadilly and a hop and a skip and another skip from both the gay village of Canal Street and environs and the very hip Northern Quarter, you realise that Native is a real game-changer for a city which seems to like having its game changed.

To the right is BLOK, the latest word in cool gyms where everything is concrete, the industrial ceiling is hung with Lonsdale punchbags and there’s even an outdoors bit where you can work out. In front of you is Cultureplex, an amorphous collection of bars, restaurants – including Bistrotheque in its first outing beyond London – and work-stations that buzz with people on MacBooks doing the Carrie Bradshaw thing. Back there are meeting spaces and boardrooms and if you look up you can see through floors of glass and mid-century furniture to the sky.

And then
there’s Native, which they were hoping against hope itself to have opened for
Manchester Pride, but missed by a matter of days. Up you go in the lift, across
huge expanses of warehouse, looking down through those glass floors to
Cultureplex and into rooms so Manchester you almost expect to find a bacon balm
from Roy’s Rolls waiting for you.

They call it an ‘aparthotel’, which might summon up images of Kirby Trouser Presses and middle-management meetings about stationery requirements but this could not be further from that idea in all its millennial loveliness.

The
industrial architecture of the warehouse has been left (not that you could take
it away), meaning yard-thick exposed brick walls, deep enough that you can
throw a couple of pillows in there and almost make an extra room of it.

Fittings are fashionably 70s with brass and exposed bulbs and simple crisp furniture while the rooms are all white linen, grey jersey headboards and real wooden floors. And then there’s a fully kitted out kitchen with a dishwasher and everything you need when you can’t be arsed to go to one of Manchester’s growing crop of foxy restaurants (Peter Street Kitchen may be the most glamorous restaurant in the whole country right now, just in case you can be arsed!)

In fact,
once you’ve gone Native, you can’t really imagine the point of doing things any
other way. You’ve got your gym, your bars, your restaurants, all the glossy
magazines strewn everywhere you could ever desire and then it’s upstairs to
make your own tea, watch some telly and get ready for a big night out not even
five minutes from your door.

You’d be
silly not to, really. Wouldn’t you? Especially at these prices.