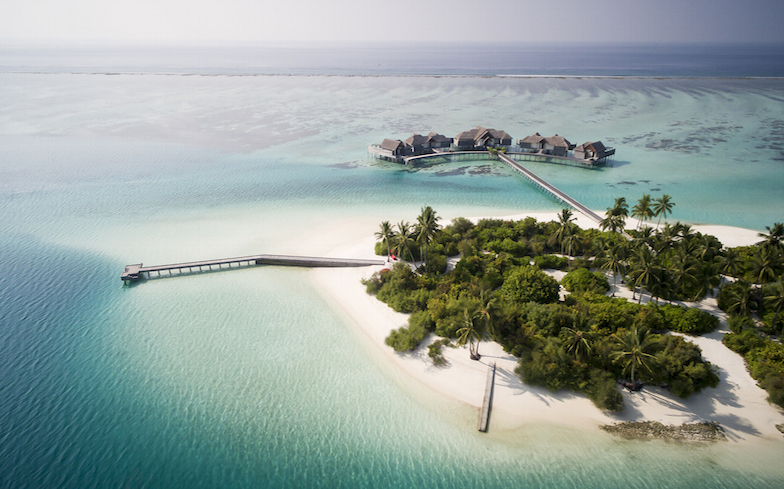 The Maldives have always brought to mind Madonna, seeing as you asked.

It was a few New Years Eves ago and a mate – big in movies – invited a bunch of us to a very fancy dinner in West Hollywood, seeing as you ask. It was well nice and we were well sloshed. Cut to just-after-midnight and our mate gets a text: ‘Hope you and the boys are having a blast! I’m in the Maldives with the kids.’ It was Madonna. Soz, ‘M’.

First of all; one of ‘the boys’! Secondly, the Maldives in
one fell showbiz text hotfooted it from honeymoon cliché to tip-top bucket
list. And people say she’s losing her touch…

You land in Malé – capital and grim – so you get the hell
out to one of the coral islands, of which there are thousands, on one of the
atolls, of which there are 26, in the rinkiest of dinkiest seaplanes the
approximate size of a Subway sandwich.  In
our case 1.5 hours southwards, deep in the Indian Ocean, flying low over lush
islands and dazzling blue lagoons and cartoon beautiful beaches and stupidly
posh resorts famous Ms go to.

We never found out which stupidly posh resort Madonna went
to, and didn’t ask ‘cause that’s uncouth, but I went to Niyama Private Islands,
thanks for asking. It’s the sort of place that demands all your superlatives – breathtaking,
magnificent, inspiring, ravishing, f***ing awesome – and that’s before your
little seaplane has even landed beside the cute jetty by the beach where the
staff (so lovely) meet you with drinks and a (posh) wet-wipe.

Niyama has two private islands, Play and Chill, which you
must admit is pretty clever. Joined by a narrow wooden walkway, Play is where
you can go nuts in the sea (parasailing, jet skiing, paddleboarding, surfing,
Seabobbing), which put to bed any notions I had about being bored off my nut in
the Maldives; Chill is where, if you’re actually in love with the person you’re
with, you can do cutesy couple-y things – sunset dinners, massages-à-deux in
the Drift Spa (I had a massage à one and I’m still buzzin’. Not a duff move),
movies under the stars, general lazing. But as the two barely stretch for a
kilometre, you can swish around according to your mood, either by buggy, on a
paddleboard or, my favourite, by bike. Cycling along winding sand roads on a
bicycle-with-basket while slightly squiffy might just be the best thing in the
world. Even if you fall off and rip your favourite trousers, the ones with the
pleats that make your thighs pop – because, hell, you’re in the Maldives. The
only thing that could make this better would be a kitten in that basket.

Oh, and we have to talk about Seabobbing. If you know what
that means we’d be high-fiving right now, if you don’t, it’s the most fun waterborne
activity you’ve never heard of. Essentially a hand-held jet ski about yey big,
you lie horizontal in the water, grab hold, rev up the gears and you’re off,
zipping across the ocean faster than a speeding dolphin then, if you angle your
Bob downwards, under the ocean as
fast and as far as your nerves/breath can take you. It’s the closest any of us
will get to being Aquaman this side of CGI.

And the accommodation runs the gamut of luxury to out-there
luxury. I had a beach villa (like, on the beach. Sand right there, ocean a few
feet further) which comes with a plunge pool, champagne on ice, bed bigger than
Germany and an outdoor bathroom which isn’t pervy in the slightest, its
crowning glory a rain shower reached via catwalk from where you can see right
through your villa (stylish to the letter) to the beach and the blue-blue sea
all while sudsing up your barnet. The overwater villas – which is what you
expect in The Maldives, right? – are all kinds of special, especially the four
that make up The Crescent, the most exclusive enclave in Niyama if not all the
‘Dives, where direct ocean access is a given, your own chef rustles up delights
at the drop of a ramekin and your air rings with the sound of private Boduberu
performances. It’s a Maldivian dance, but you knew that.

Of course should you wish to dine in public, there are six
restaurants to choose from. No wait, seven. Actually, if you count the bespoke
options – barbecues on the beach, sundowners, amuse-bouches on that private
catamaran champagne cruise I’ll come back to later – we’re talking at least 15.
Of these, fine dining at Edge – a mile out to sea in a building that looks like
Calatrava designed it and only accessible by boat – is your standout. Oh, that
and Subsix, right underneath and actually underwater so your vistas are of fish
you’ve never heard of but are oh-so pretty. Oh, and Nest, high up in the trees
like something out of The Emerald Forest where the food is teppanyaki-cum-Thai-cum-Chinese-cum-Indonesian-cum-extraordinary.
And if you fancy coming over all Malibu, the Surf Shack at Niyama Corner at the
edge of Play has dudes in shorts downing shots, which is nice.

See, Our Glorious Leader aside (that’s Madonna in old
money), I’d never really been that bothered about the Maldives. I’ve always
thought it a long way to go to be expensively bored. Deserted beaches aren’t my
thing, regardless of how pretty they are (beach bars and boys are more my
fancy), and seeing couples in love makes me want to kill people – mainly those
couples. Which is where Niyama comes in, all gorgeous and delightful and
surprising and fun, fun, fun, myth-busting at every tropical turn. Because when
you’re being dragged around the Indian Ocean on an inflatable bed after a
liquid lunch of Ruinart with three new mates giggling like our Speedos depended
on it, or sailing among coral reefs as the sun goes down while sipping a juicy
red and lowering the tone of all the atolls, or darting around on a jet ski,
dolphins joining you for the ride (so many dolphins! So many you stop counting.
Some even spinning in the air, as if Darcey Bussell’s taking notes), there’s no
place I’d rather be. Someone should use that line in a travel advert.

Rooms at Niyama Private Islands from $886 per room/night staying in a Beach Villa on a B&B basis. niyama.com